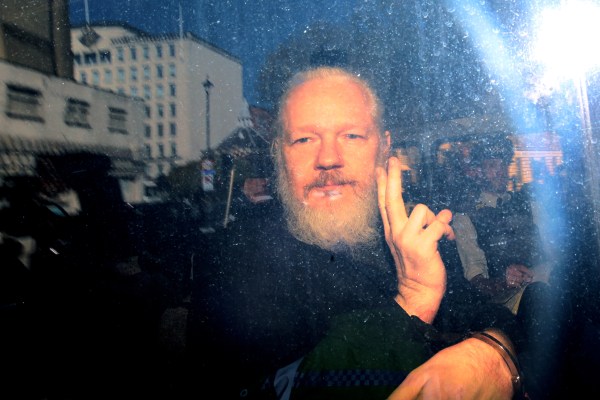 In the basement of the newspaper’s offices, editors used angle-grinders and drills to destroy the computers in an effort to render its data unusable after “weeks of tense negotiations” between the newspaper and the British government, which faced pressure from U.S. authorities to return the leaked top secret documents. The U.S. and Britain are close intelligence sharing partners. Despite the fact that there were several copies of the NSA documents — including in the U.S — the newspaper faced a threat of punitive legal action or prosecution if they declined.

“The only way of protecting the Guardian’s team was for the paper to destroy its own computers,” said Luke Harding, a Guardian journalist.

In the years of citing this case in why press freedoms are so important, the Americans always respond: “Wait, that happened?”

The Guardian’s situation would never happen in the U.S. It’s not uncommon for national security reporters to obtain classified information or rely on government employees providing secret information, particularly to uncover abuses of power or the law. As the only named profession in the U.S. constitution, the U.S. press is a shining example of holding the powers to account no matter what.

But the most recent charges laid against Julian Assange has put those press freedoms under threat.

Julian Assange, widely regarded as a liar, a proponent of misinformation, and loathed by many for generally being a shitbag, has been defended by some of his biggest critics since the latest round of charges were announced against him.

Assange last week became the first person to be charged for publishing classified information under the Espionage Act, a law that predates the Great Depression by an entire decade, and used to prosecute foreign spies and government whistleblowers.

“This is exactly what national security reporters and their news publications often ask government officials or contractors to do,” said Jack Goldsmith, a professor at Harvard Law School and former government lawyer, in a post on Lawfare.

In fact, that’s exactly what I’ve done. In 2017, following the fifth security lapse at NSA in as many years, I obtained and published classified documents relating to the government’s Ragtime program and the Red Disk intelligence sharing platform. While it’s not unheard of for reporters to face government investigations for doing their jobs, not a single journalist has been charged for obtaining or publishing classified information in the past hundred years since the Espionage Act became law.

It’s no surprise that the indictment has rattled news organizations and reporters, who have published classified information like off-grid torture sites and global government surveillance provided by anonymous sources and whistleblowers, for fear they may also suffer a similar prosecution.

Washington Post editor Marty Baron said in a statement: “Dating as far back as the Pentagon Papers case and beyond, journalists have been receiving and reporting on information that the government deemed classified. Wrongdoing and abuse of power were exposed. With the new indictment of Julian Assange, the government is advancing a legal argument that places such important work in jeopardy and undermines the very purpose of the First Amendment.”

Assange, through WikiLeaks, published numerous troves of highly classified diplomatic cables and military videos showing the killing of civilians including a Reuters camera crew, provided by former Army intelligence analyst Chelsea Manning, who was herself charged under the act and imprisoned before her sentence was later commuted. The government’s latest indictment accused Assange of publishing “unredacted names of human sources,” which “risked serious harm to United States national security.”

Some of Assange’s most vocal critics have said the U.S. is prosecuting Assange for “the last good thing he did”. Since his publications, Assange has sullied his own name and reputation, not least by working with Russia to undermine Hillary Clinton’s presidential campaign by releasing embarrassing stolen emails.

The Justice Department said Assange is “no journalist.” But the First Amendment, which protects freedom of speech and press freedoms, doesn’t distinguish between whether someone is a journalist or not.

“The First Amendment gives journalists no special rights,” says national security lawyer Elizabeth Goitein. in a Washington Post op-ed. “In prohibiting abridgments of ‘the freedom of speech, or of the press,’ it gives equal protection to those who speak, those who write, those who report, and those who publish.”

In other words, it doesn’t matter whether Assange is a journalist or not.

Under U.S. law, all — regardless of whether a person is a reporter or not — are protected by the same freedoms. With a successful prosecution of Assange, there’s nothing stopping the U.S. government from laying charges against any other American — journalist or otherwise — for receiving and publishing classified information.

“This is not about Julian Assange,” said Sen. Ron Wyden, a prominent lawmaker and member of the Senate Intelligence Committee. “This is about the use of the Espionage Act to charge a recipient and publisher of classified information.”

“Assange’s case could set a dangerous precedent with regard to the kinds of activities that the First Amendment does not protect — a precedent that could chill even the most careful, skilled professional journalists from pursuing stories involving national security secrets,” said Steve Vladeck, a professor at the University of Texas School of Law, in an op-ed.

The Washington Post reported Friday that the Obama administration considered bringing charges against Assange years ago but was concerned that the charges would prosecute conduct “too similar” to that of reporters at established news organizations.

But now that the Trump administration has brought charges against Assange, journalists once branded by the president the “enemy of the people” could soon be treated as enemies of the state.