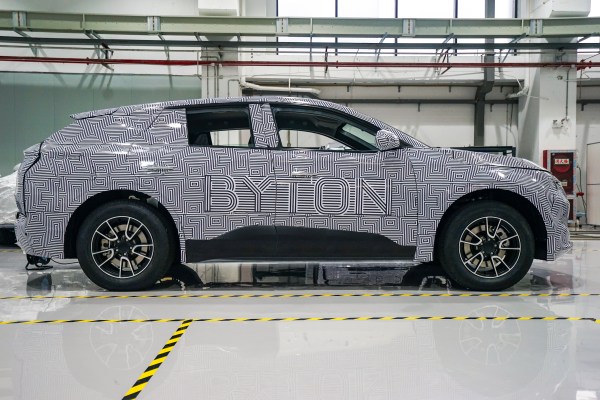 That’s when self-driving vehicle technology startup Aurora will take over.

Byton, the new China-based automaker founded by former BMW and Infiniti executives, has produced the first 10 prototypes of its tech-centric all-electric SUV and some of them will be in the U.S. before the end of the year, company president and co-founder Daniel Kirchert told TechCrunch.

Byton plans to produce another 100 prototypes of the SUV, which the automaker calls the M Byte, by the end of 2018, Kirchert said in recent interview during Monterey Car Week.  Some of these vehicles will be shipped to the U.S., where self-driving vehicle technology startup Aurora will take over.

Aurora, a startup founded by self-driving tech stars Chris Urmson, Sterling Anderson, and Drew Bagnell, will begin testing its Level 4 autonomous driving systems on the Byton SUV prototype before the end of 2018, according to Kirchert. The two companies announced a partnership in January at the big tech trade show CES.

Byton will continue with its own tests such as vehicle reliability and cold-weather testing at its Nanjing prototype manufacturing plant. The plant is built on the site of Byton’s future factory, which is already under construction.

The prototype production milestone comes on the heels of $500 million in fresh funding that was announced in June. The Series B round included investors FAW Group, Tus-Holdings and CATL, which TechCrunch has learned will supply Byton with batteries.

A production version of the M Byte is targeted for the end of 2019, with the first vehicles to be sold in China. Sales will then move to the U.S. and Europe in mid-2020, Kirchert said.

Back when Byton first revealed its SUV concept at CES this January, founders Kirchert and CEO Carsten Breitfeld said it was close to what the final production version would look like. It’s about 80% complete, Kirchert said recently, adding that the prototype has modest changes from the concept, including a slight changes to the height and headlights as well as improvements to the door latches.

The rest, including a massive touchscreen that takes up the entire dashboard, is largely unchanged. the M Byte also has another touchscreen on the steering wheel and a variety of “smart” connected features that lets customers use hand gestures and voice commands via Amazon’s Alexa assistant to control aspects of the car. The vehicle also monitors the driver’s heart rate, weight, oxygen saturation, or blood pressure.

The M Byte SUV will not come equipped with a Level 4 system, a designation by SAE International that means the car takes over all of the driving in certain conditions. Instead, it will have come out with Level 2 capabilities, which means the vehicle has combined automated features such as steering and acceleration, but still requires the human driver to remain and ultimately responsible.

Kirchert explained that the company is using its SUV prototypes to ensure a Level 4 self-driving system, can be properly integrated in future vehicles such as the K Byte, a new concept from Byton that was on display Sunday at Pebble Beach Concours d’Elegance. The sedan will be the second vehicle in Byton’s portfolio and is expected to have a global market launch.